Welcome to my photo archives, some of these galleries are secure. Please click here to inquire about access, stating your name/email as well as the name of our relative or friend guiding you to this site. In addition to creating new galleries you may have been notified of, images are regularly added to existing galleries so check back for updates.

Though this Indian odyessy began with a very nice stand-up basket case 1947 Chief in the long gestation period that was to be its restoration this machine - a real runner! - became available on, ahem, rather short notice. Like I was settling up my house rental bill with my roomie, a professional motorcycle broker, from Daytona Bike Week and discovered that his crusty barn find, affectionately referred to as the Objecto De Funk had not sold at auction in Daytona the week prior. So instead of a tidy sum for lodging, spent about 10 times as much and brought this machine home which then turned into an absolute sentimental favorite. Read about its "rustoration" here at my site, 1946 Indian Chief - An Old Painting Retouched -. The mo for this machine over the last nearly 20 years was to see how long it could solder on before the motor would finally have to come out of the frame for a proper bottom up rebuild instead the light topside freshening I'd done so long ago. As of the Winter of 2010, that point had arrived. If leaned over onto the side stand when idling, the flywheels would shift leading to an odd whirring noise. It was already using so much oil - a quart every 75 miles - such that I now ladled replenishing supplies out of a 5 gallon drum of old oil drained from my other machines, it no longer needed changing in as much as it was a "total loss system" at this point. Compression had dropped to the point where it could be started with one's hand. But, it ran as smoothly as ever but at the risk of having rod come through those matching number beautiful cases, I took it apart. And just as well, what was found was quite surprising.
Read More 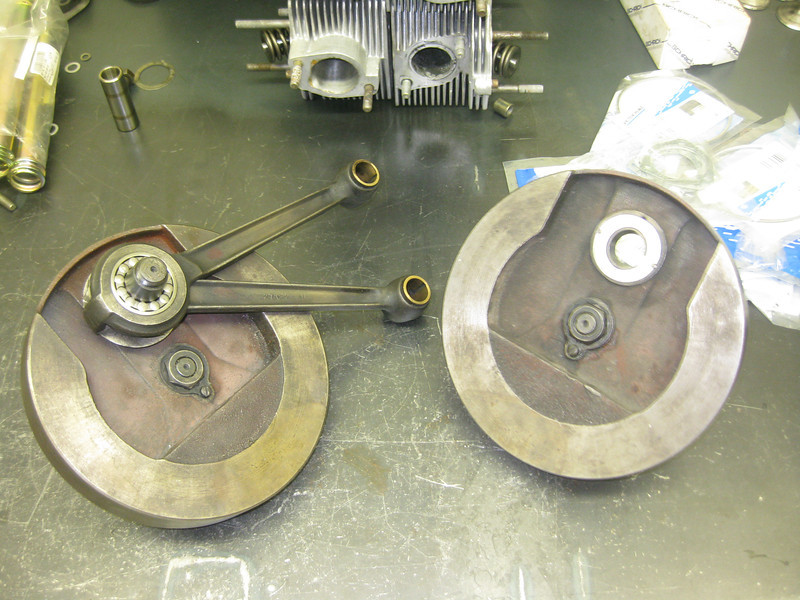 Both pinion, drive shafts and crank pin were perfect but the rod assembly had walked to one side, worn the shim down till there was sufficient clearance for it to rattle of its two pins staking it to the inside of one flywheel. The excessive .050 clearance contributed to the low whirring sound when this machine was leaned on the side stand. Repair involved boring for two new pins in the flywheels. The reason for the rod assembly forced to one siide is that the rollers were assembled with an undersized set on one side of the forked rod causing it to load offset. It is critical that one size the sets of rollers to the exact same clearance on both races in the forked rod as the inner male rod.